He’s known for his massive size and definition. He was as dominant as Schwarzenegger and his name is Ronnie Coleman.

So what’s up with the legendary, 53-year-old bodybuilder?

The most impact he’s had recently was when he posted online pics showing him recovering from a major back surgery. He still has one more procedure, then lined up. However, even on his hospital bed, he’s still hitting the weights to fight atrophy. 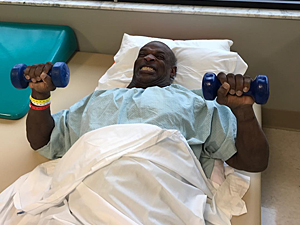 The 300-pound icon had two hip replacements and multiple back surgeries with one of them because a rod came loose right after surgery. He also had his intestines taken out and put back in so doctors could fuse screws into his back.

Being careful not to send the wrong message of his dumbbell lifting on his hospital bed, he said he’s “trying (his) best not to injure his back as (he’s) had (back) surgery.”

If you have a physical setback of your own, ask a medical professional first before going back to your routine.

A company made for anyone looking to better their body & mind! Your daily source of motivation and tips!